In December 2019, the Energy Development Group has submitted an application for two exploration concessions in onshore Albania: Block “Panaja” and Block “C”. Both Blocks has been explored in the past by AlbPetrol and operator INA Naftaplin, resulting with two dry gas fields discoveries in the Neogene reservoir sediments. Preliminary evaluation by EDG shows for untapped gas potential within two Blocks.

The onshore Panaja Block has a size of 312 sq.km and is located in south-west of Albania, along the Adriatic coast, just North of Vlora city (Figure 1). Panaja Block lies in the southern part of the Durresi Basin, where thick and thrusted Neogene siliciclastic deposits comprise the major play for dry gas. The Block is adjacent to the south and to the east to the prolific Ionian Zone, where several significant oil and gas fields have been discovered. Two fields have been discovered so far within the Block: Drashovica oil field in early 20’s of last century and Panaja gas field in mid-80’s. There are several prospects identified in this block which would warrant further investigation. 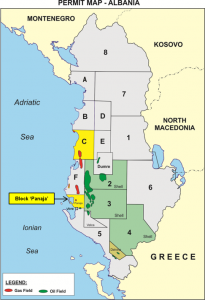 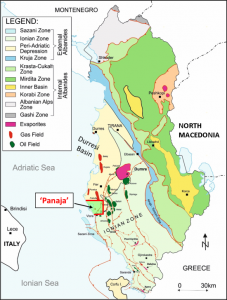 Block ‘C’ has a size of 900 sq.km and is located in the central part of onshore Albania, along the Adriatic Sea coast line (Figure 2). The Block is stratched over the southern-most part of the Durresi Basin, where thick and deformed Neogene sediments are favoring the gas accumulations in the sandstone reservoirs. The Neogene sediments have been proven as gas bearing at Ballaj dry gas field within the Pliocene deposits. Deeper horizons remain virtually unexplored, while modern data acquisition and processing of geophysical data leaves the possibility of untapped hydrocarbon resources quite open. 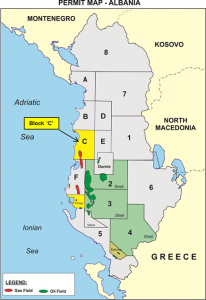 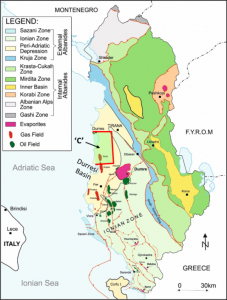