EDG’s technical evaluation underscores the significance of field rejuvenation by a rigorous recompletion and stimulation program which modern technology could be brought to bear.

The onshore ‘Povelca Field’ lies in the western part of Albania, along the Adriatic coast and discovered by DPNG (former AlbPetrol) in mid-80’s (Figure 1, a, b). The dry gas has been found in a stratigraphic-structural trap of Upper Miocene (Messinian – Tortonian) formation. The turbidites reservoirs are over-pressured and confined in a south-north trend within a channelized slope system.

The onshore ‘Frakulla field’ lies in the western part of Albania, just south of Fieri town (Figure 1, a, b). The field has been discovered by DPNG (former AlbPetrol) during 70’s, based on 2D seismic lines and following the south-north geological trend of Trevllazer-Frakulla buried Neogene anticline. The gas has been found mainly in a combined (stratigraphic-structural) trap of Upper Miocene (Messinian – Tortonian) formation. The sandstone reservoirs are developed in a deltaic depositional environment. 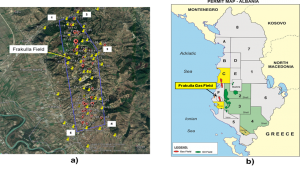 A careful analyses and introducing modern logging and w/o jobs, could increase the chances to drain more gas from actual wells and by employing new sidetracks in the existing wells.